Interview with: Kate Higgins is a PhD candidate at the School of Political Science and International Studies at the University of Queensland, Australia. She has over 10 years of experience working and researching in the South Pacific at both grassroots and national levels. Her doctoral research explores governance in Melanesia. Prior to beginning this research project, she worked as the Pacific Program Manager for an overseas development NGO, and recently has been working alongside the Solomon Islands Government on initiatives which seek to improve relationships and networks between government and localised forms of village governance.

Introduction (from Kate): Recently I returned from Europe where I undertook a series of visits to research institutions as enabled by the Graduate School’s International Travel Award (GSITA). I visited a Research Centre hosted by the University of Leipzig, called ‘Processes of Spatialization under the Global Condition’. The Research Centre involves political scientists, geographers, historians, cultural scientists and anthropologists to explore ‘spatial orders’ in the global context. Here, I had the opportunity to present a paper at their weekly research colloquium which outlined the conceptual and methodological approaches I draw upon in my PhD research project, Exploring Governance in Melanesia. This paper critiques social imaginaries which underpin how we understanding of governance in Melanesia – imaginaries of weakness, smallness (see Hau’ofa), and disconnection – which I argue have emerged from colonialism and are reproduced through significant ongoing development aid intervention. The paper then contrasts these dominant perspectives to the way political order is spatially and relationally understood by Pacific Islanders, drawing upon ideas from political geography, but also from Melanesian ethnographers who have demonstrated how ‘place’ is a key concept which organises both social relations and also knowledge (Bolton 2003). Given the focus of the Research Centre is largely situated in Africa, the Americas, and Asia (and one project focusing on rural Australia which in partnership with School of Social Science at UQ), these scholars were interested in exploring other regional contexts. In addition to presenting at the colloquium, I conducted an interview with the Centre for their blog which asks visiting researchers to think about their research projects and interests as ‘Seen Through a Spatial Lens’. This interview can be found at http://trafo.hypotheses.org/7284 or http://research.uni-leipzig.de/~sfb1199/blog/ and is also reproduced below. 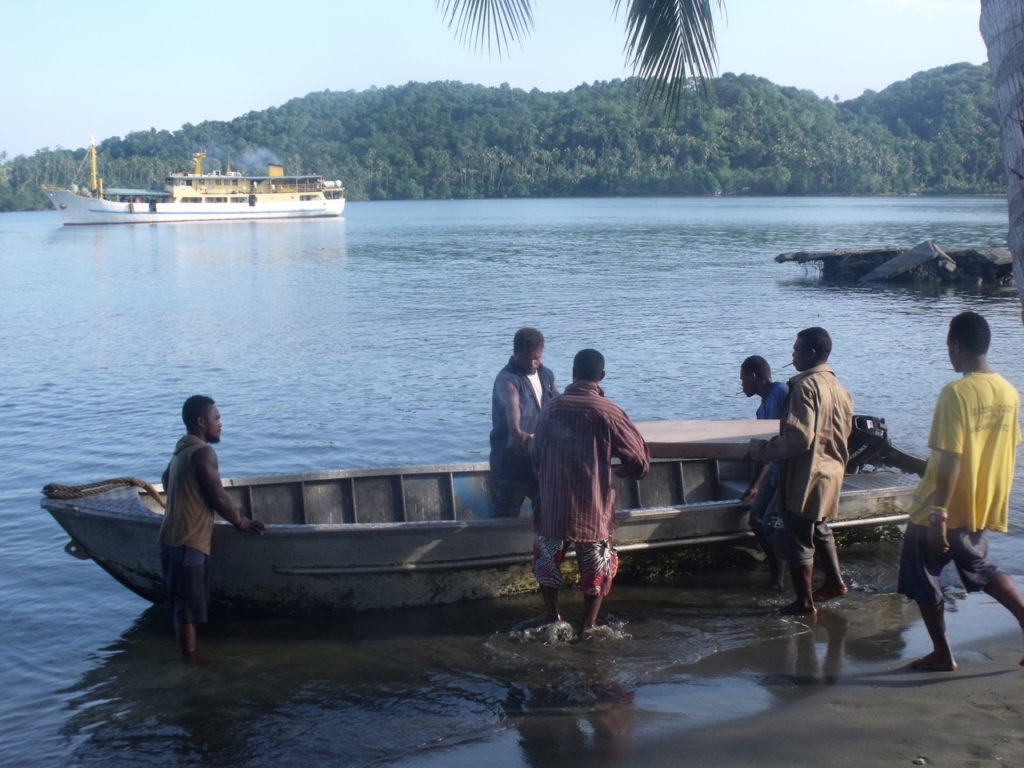 In three sentences, what do you research and which questions guide your research?

I explore the coexistence and enmeshment of different forms of governance in place, in ‘villages’, in Melanesia, a region which lies in the Southwest Pacific Ocean. Specifically, I explore the different ways in which ideas and ideals of governance are being articulated, and what these articulations can tell us about the ways in which people construct order, against the backdrop of current international development intervention which aims to strengthen the state based on an ideal form, focusing particularly on the governance of government. The key questions which guide my research are: what are the different ways in which ‘governance’ is understood and what do these understandings represent? How have different forms of governance come to coexist in places throughout their history? And what does this suggest about the ways we think about social and political order, and the ways we think about the state, in Melanesia?

Governance has become an important concern to both policy makers and villagers alike, although very different things are meant by ‘governance’. This research seeks to bring together different conversational spaces about governance in Melanesia. This research project has been motivated by observing the incredibly well financed ‘statebuilding’ mission in Solomon Islands – led by Australia – as well as other significant ongoing development interventions which aim to strengthen state institutions, to bring them closer to what OECD countries are imagined to be. Within these interventions there seems to be a contradiction of both positivism and pessimism: positivism that there is no alternative to producing order than a state, viewed as an idealised set of legal-rational institutions based in a national capital, and, at the same time, very pessimistic assessments that this will ever be possible in Melanesia, a region imagined in terms of its smallness and disconnection from centres of commerce. But what are people in villages saying about the way they live their lives together? What ways kinds of political participation and accountability already exist? These questions are largely marginalised, and form the key motivation of my research.

Which key insights from your research do you consider to be the most surprising for general audiences? Why do you believe this to be the case?

There is by no means a lack of governance (and in many places relative order) in the villages which constitute the Melanesian region! There are layers of organisation which, most of the time, are interwoven and able to coexist in a village: modes of social organisation based on kinship, marriage ties and a relationship with land, a plethora of community institutions which are a hybrid of colonial and neo-traditional structures and processes, strong Christian institutions, and also – perhaps most surprisingly to those who view the state as disconnected – structures of, and people who represent, state institutions, as well as the state as an idea. These layers are overlaid upon each other, and people draw upon them as the moment requires, such that in one lifetime a person may be a customary chief, a local politician, development worker, or a church elder. One legitimate form of governance does not preclude others. Multiple identities exist, and while there are significant expressions of local autonomy, there is at the same time a great level of engagement with the state. This sets the scene for multifaceted interactions which drive daily action. This may be surprising to those who imagine Melanesia in terms of idyllic, simple, island paradises, or as places of poverty where people are victims of states ‘failing to govern’, left behind in the fast-paced world – the two standard portrayals of the region. My research shows there is in fact a lot going on.

Seen through a spatial lens, which processes of spatialization – understood as a central dimension and result of social actions – are particularly relevant in your research? Why?

Firstly, there are existing taken-for-granted spatial imaginaries of the South Pacific region, including of Melanesian states which need unpacking. Melanesian states are portrayed as needing to ‘catch up’ to the global, while the national is viewed almost entirely in terms of weak state institutions, and the ‘local’ is disconnected, seen as irrelevant, or as the realm of ‘culture’ which has yet to be ‘separated out’ from the legal-rational state in order to be ‘governed over’. Thus, the global, national/state, and local are somehow seen as separate spheres. The reality is that different histories, ideals, interactions, institutions, processes, and social and political projects which have emerged from different internal and external sites, are interacting in spaces (and places) in the region. Thus, rather viewing villages as irrelevant, undeveloped, or distant from the modern world, a spatial lens views villages in rural and urban areas as sites of contemporary politics, where elements of all political ‘levels’ are interacting, and where different spaces which incorporate these diverse elements emerge around particular priorities and events.

Let’s take a look from the future! Which processes of spatialization in the early 21st century were crucial for society in 2050?

This is a difficult question! However, in the context of my research in the Pacific, thinking about the future brings the present (and the past) sharply into view: in what ways in which current global development projects – themselves based in futurist ideals – aiming to strengthen the (deeply unpopular) model of the centralised state and to make more productive natural resources, are interacting with existing and enmeshed forms of order which have emerged throughout history, particularly through interaction with the colonial state? How are global projects impacting upon current identities – maintained around land, subsistence livelihoods and food security, and social order and spiritualities – and how are these identities remade in contemporary spaces? Looking at the past, say even 50 years ago, it is possible to see how global forces were reshaping local places, but with different results than what might have been expected. What can continuities from the past say about the future?

What role could science – and your research – have played in this development and how do you think this could have happened?

I am not sure really sure about the role of ‘science’, including ‘social science’ – however one role is the need for all disciplines to acknowledge existing frames which reproduce knowledge, including unpacking how different kinds of knowledge are tied to specific spatial understandings, and to understand what is excluded by these frames and why. One role of my research is to point out that current dominant ideas of development, governance and the state are part of global political and historical projects, and as part of histories-being-made. These projects are part of contested ideals about how “society” is, and should be, governed. Failing to understand the shared priorities of Melanesian societies, and marginalising or misunderstanding these priorities, continues to produce unpredictable outcomes. I hope this research might contribute in some small way to breaking down the barriers between different conversational spaces in which ideals about governance is located, to broadening the conversation to one, firmly embedded in the context, about legitimate and realistic prospects for peace and livelihoods.

This interview has been reproduced here with the permission of the author.

This site uses Akismet to reduce spam. Learn how your comment data is processed.

Postgrad student-led initiative at POLSIS UQ. A peer-review online space to talk politics in all of its forms.

New post (Conversations with a Terrorist) has been published on Dialogue UQ Political Discussion - http://dialoguejournal.org.au/conversations-with-a-terrorist/

New post (Will Donald Trump’s Buffoonery Be His Saving Grace?) has been published on Dialogue Discussion - http://dialoguejournal.org.au/will-donald-trumps-buffoonery-be-his-saving-grace/